It was hot. Not like a hot that we normally know, but one that seems to make you squint even though you are in the shade. As if making your vision being less bright could give you some relief. The place where we load the cargo is in a big port, not much shade, and the lack of wind pressed the still, dank air, down on to us. When the watermelon arrived, we had been waiting for some time. The crew grabbed the watermelon and started putting them in the boat.

“Wait, we need pictures said the major’s assistant” I agreed reluctantly. I too needed pictures, and for the next 15 minutes we stood under the hot sun with poses in various configurations. “Watermelon here, the boat in the back…. hold the watermelon…. turn…Okay, one more….oh with my camera too…”Turning again.  It is hard to imagine a watermelon model, but thats what we were.  I think the best was the “watermelon cam.” We strapped the go pro to the watermelon and passed it down the chain for loading. 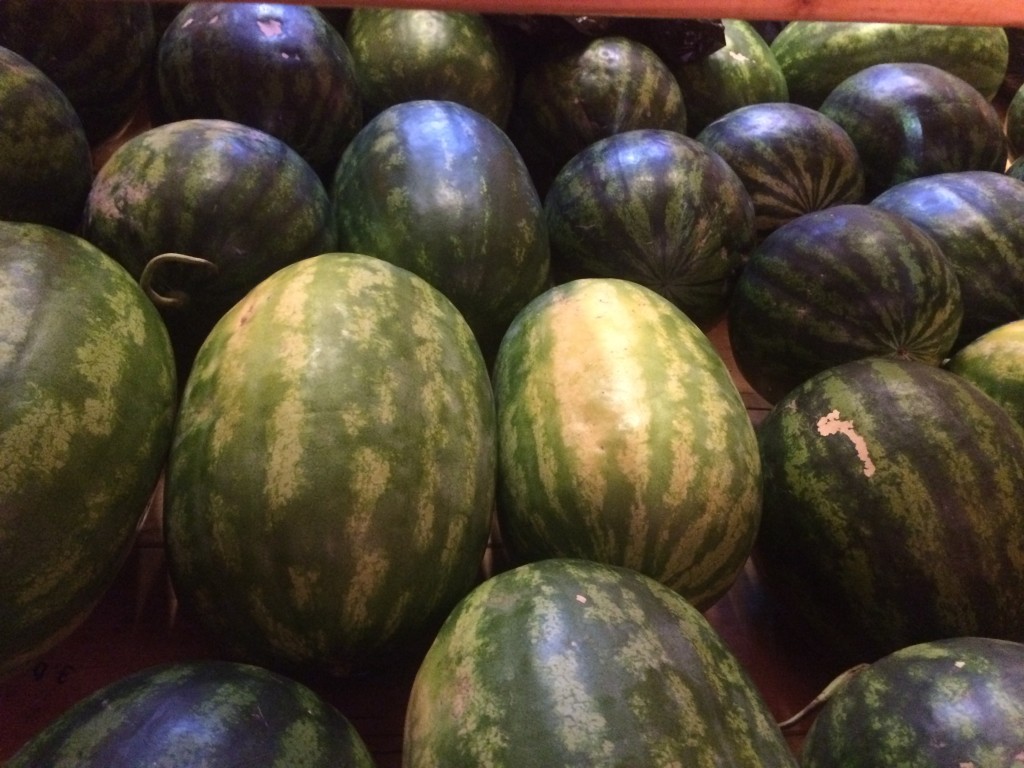 Relieved and loaded we opened one up. Wow! How good is a fresh watermelon after being in the hot summer sun. This was an amazing feeling like a rush through the veins. Your eyes open wide as the gush of water and sweet juice seem to activate the cells in your body. Fully refreshed with watermelon dripping from our chins the smiles returned. Not the smile for the camera, but the contented smile of a job well done.

Fully loaded we cast off and headed out of Ploče with a big thanks to the Mayor and his assistants.

First stop was just out side the port, with a calm sea it is possible to swim in the open water. We just turned off the engine and the boat drifted to a slow stop. The cool water was almost as refreshing as the watermelon. We eventually made our way out to the end of the peninsula with swim stops and passes though little bays till we reached Lovišče, a beautiful harbor at the tip of Peljašac. This peninsula is more like an island because it is long, thin, and remote with huge mountains spanning its length.

This community would be the first place we would offer up our new sweet fruit to sell. As part of the expedition the students sell, actually give away, then ask for donation to the Home where they live. In this way they can share the experience with the students back in the Home. With the money they make they buy something that every one can use. In years past, they bought a DVD player and video games. As educators, we cannot tell them what to buy, only that it must be able to be used by everyone in the home. And sometime we just have to accept the results.

When we got to Lovišče, we had an extra special welcome. Ana the psychologist onboard was from the neighboring island Hvar, and her aunt and uncle lived here. When we arrived, it was like a homecoming for Ana and this made it very nice for all of us as well. Her cousins had a restaurant right in front of the port. After we tied up the boat we got to go have a nice cold drink with her family.

They offered us to come to eat dinner at the restaurant, but we politely declined saying that cooking and living on the boat for the voyage was part of the program, and that is what we did. We made dinner right on the dock. We pulled our little boat out and made a stand for watermelon and the crew was busy cooking cutting watermelon or doing maintenance. Even after just a few days, it was great to see how the students were working together. 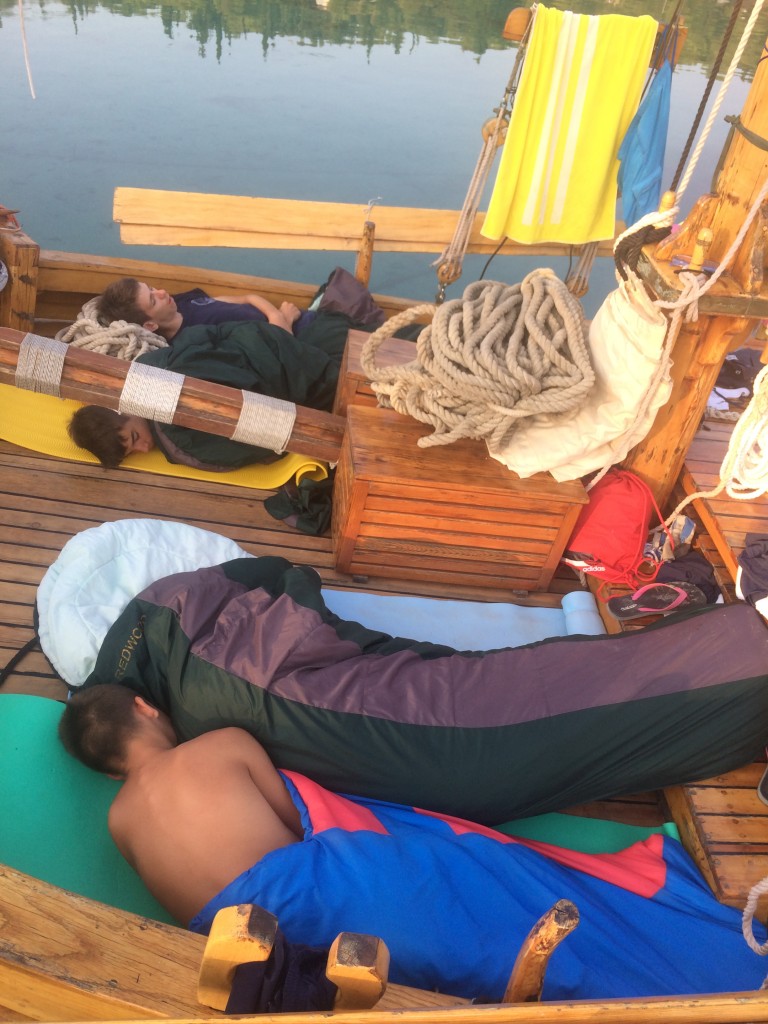 During this trip we had been able to stop at the villages of almost every crewmember, first Vedran in Zoastrog, then Ana in Lovišče, Now it was Linda’s turn and we set sail for her hometown in Vela Luka, Korčula. We didn’t know it at the time, but we were in for a real treat.

Linda told me half way to Vela Luka that the radio station in Vela Luka wanted to do an interview with her about the trip. They called while we were sailing, and she told them all about the project. This was not all, there was a congregation of small sailing boats waiting for us in a bay about three miles outside the harbor. From there, we would have an amazing lunch with fresh fish and all the fishermen and sailors got a chance to meet our crew. In the afternoon we went diving for sea urchins and snails and the crew got a chance to lean about the animals that live along the rocky shore from the fishermen. In the end, I think it was only one of students who said they liked the taste of sea urchin eggs.

As the sun started to set, we prepared to make our way into Vela Luka. There were Five boats with latin sails hoisted as the sky lit up with colors from the sunset. I was surprised that our big cargo boat was getting the best speed as we sailed in on the perfect west wind. One of the boats had an accordion player and we were all singing.

What a chorus. Boat to boat, under said, just the wind for accompaniment, the players and sailors sang their way into Vela Luka to the biggest party our crew had seen. Ribarski Noč, or Fishermans Night, was happening and the crowd gathered on the shore to watch our parade of sail enter the harbor.

When we tied up it was mayhem, we were rushed by a mob of people all there to get watermelon. The crew scrambled to set up the stand, Linda’s friends, relatives, the fishermen, and sailors were all helping. Once the stand was up we were flowing through the melons like nobodies business. I took a second and stood back, to just watch. It was like that moment you know when sounds become quiet and vision is clear, taking it all in, like the making of a memory, for a lifetime.  I know I just paused for a few seconds but it seemed like minutes, and then everything rushed back in. I hoped the crew also got a chance to see the sight from a distance like I just had. Somehow I doubt it.  They we all having to much fun passing out the watermelon to kids and families along the pier. 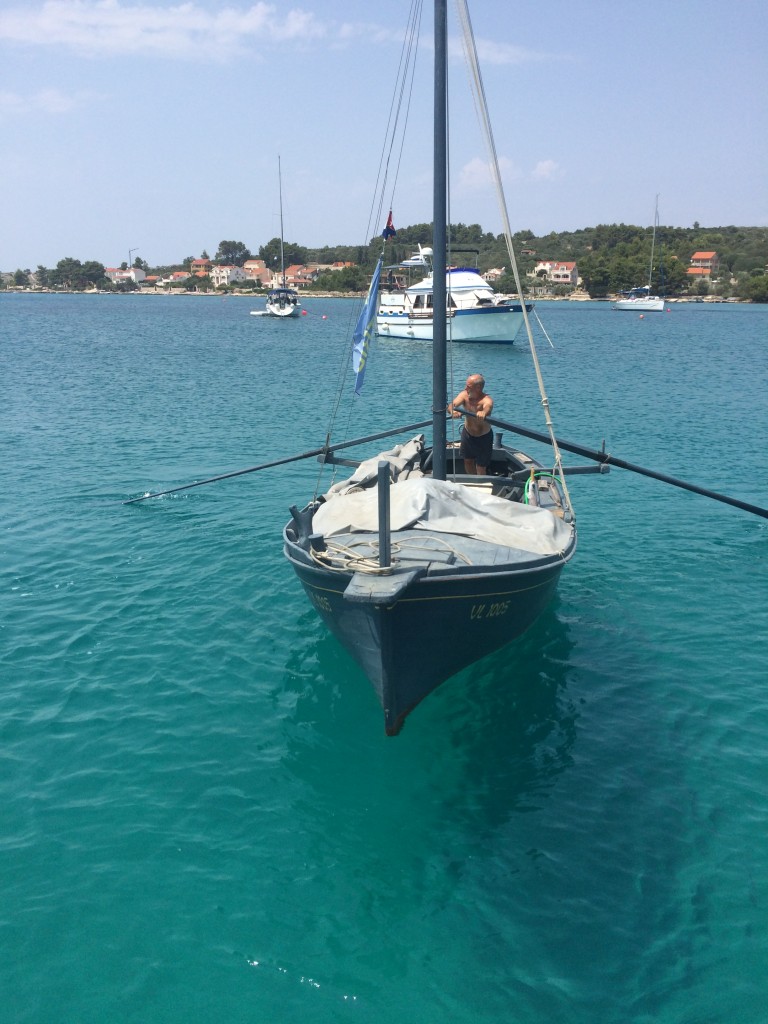 When the crowd finally cleared at around 11pm, the students managed to go though over half the cargo. They would surely have enough to buy something really nice. When it was all put away and cleaned up, we all sat down and had a toast to the day and to Linda for organizing such a great day. We talked about where we would go next, to the remote island of Lastovo, and the whole crew finally settled down to sleep well after midnight.

The next morning we were again greeted with the company of another latin sail as we left the harbor. Denis a shipwright from Vela Luka sailed with us to the tip of the bay, then we waved goodbye and set out for Lastovo.

Lastovo is a special place. It is one of the furthest islands in the archipelago and was closed to tourism until the 90’s, which has made it largely undeveloped. We were happy to find an empty pier to tie the boat and relax. After a night with so much action and excitement Lastovo felt like a vacation.