A Bond Between a Boat and Her Crew 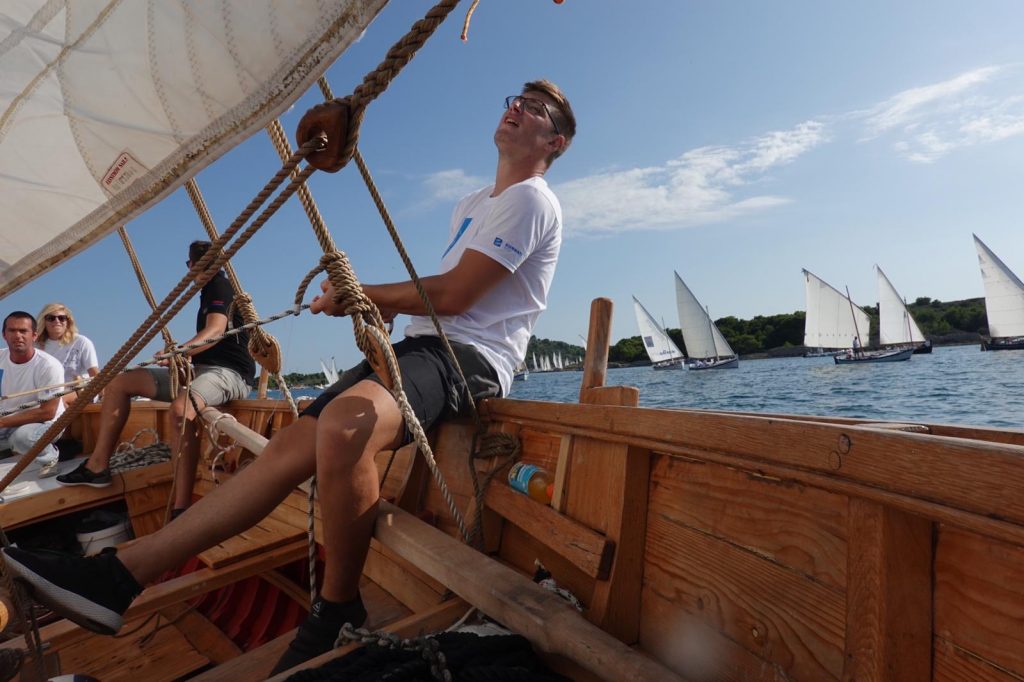 A Bond Between a Boat and Her Crew

Boats have a way of bringing people together. Maybe because a special type of person is attracted to their lines and shape, or the romance of the sea, but around boats I have always found my friends. Maybe it is also because when you are on a boat you work as a team, a crew to get from one place to another and that bond stays strong on shore. That is part of the inspiration for the work that we do with AMI, to use traditional boats as a platform for youth development. Over the years we have attracted some special souls to this project and one unique boat. Vinka, a 7.5 meter, fishing boat originally powered under sail and oar, was built on the beach in Komiža in 1937. It was in this place that my mentor Joško Bozanić grew up and began his work as a linguist, historian, poet and inspiration for others, including myself to preserve the heritage of the sea. The story this month is of Vinka’s first race and of some of the people who have found their way to her and to the work that we do….

I was sitting in the pier looking out over the fleet of boats getting ready for one of the largest traditional boat races in croatia, when I first met, Mladen Ščerbe. I had been given his number by the now director of AMI, Marko Knezević. He said this is someone you have to meet. I had tried to call several times but with no answer and I had no idea who Mladen was when he finally picked up the phone. Little did we know we were less than 50 meters from each other when we called. It was just before the start of the 2009 Latinsko ‘Idro. Each year the Latinsko ‘idro, latin sail attracts more than 80 wooden lateen rigged sailing craft that converge from all over Croatia on the Island Murter for the festival of St. Michael. 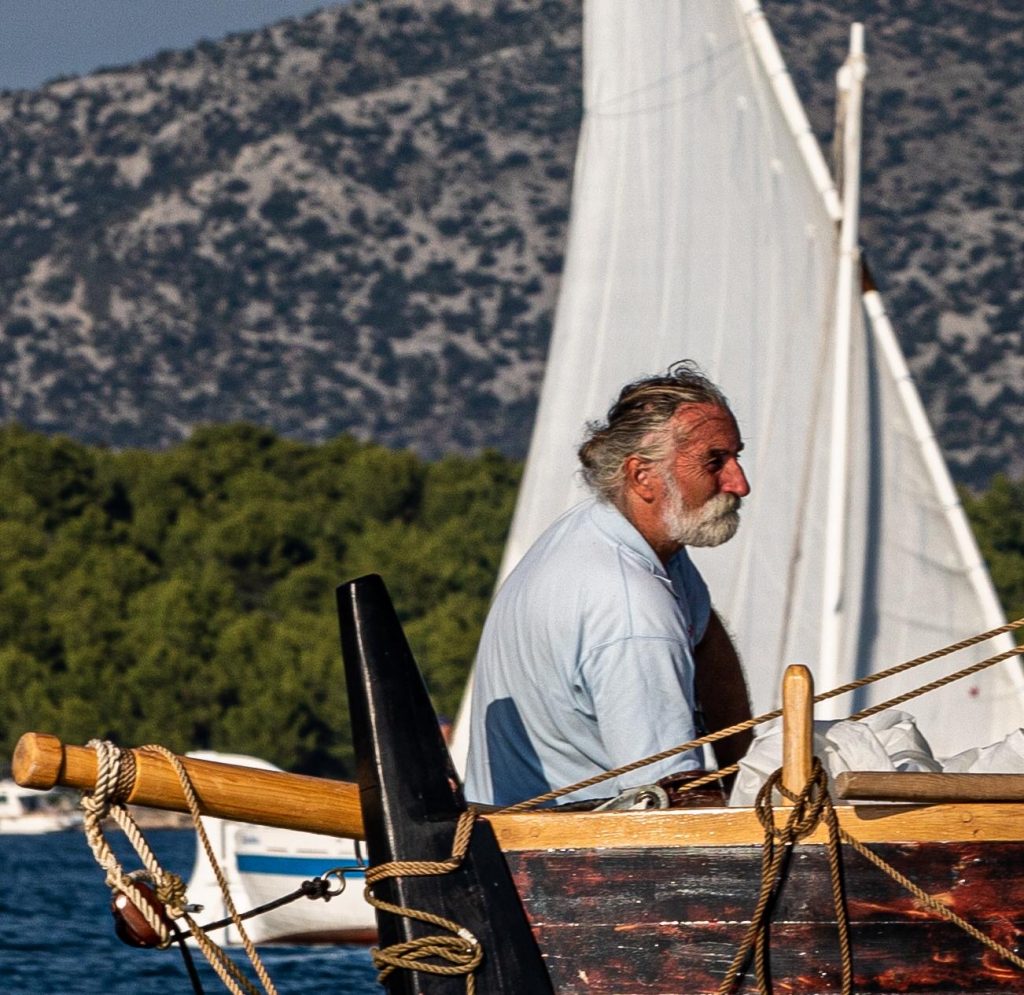 This past weekend Mladen, and Marko sailed together on Vinka as she participated in the race some 10 years later. The race for us represents a triumph not only for the crew to participate in this community gathering but also for us as an organization, completing a restoration of this historic boat but also the bringing together of people as a crew and looking ahead to future events and the ways in which Vinka can inspire us to be better sailors and leaders as we are responsible for the boat. 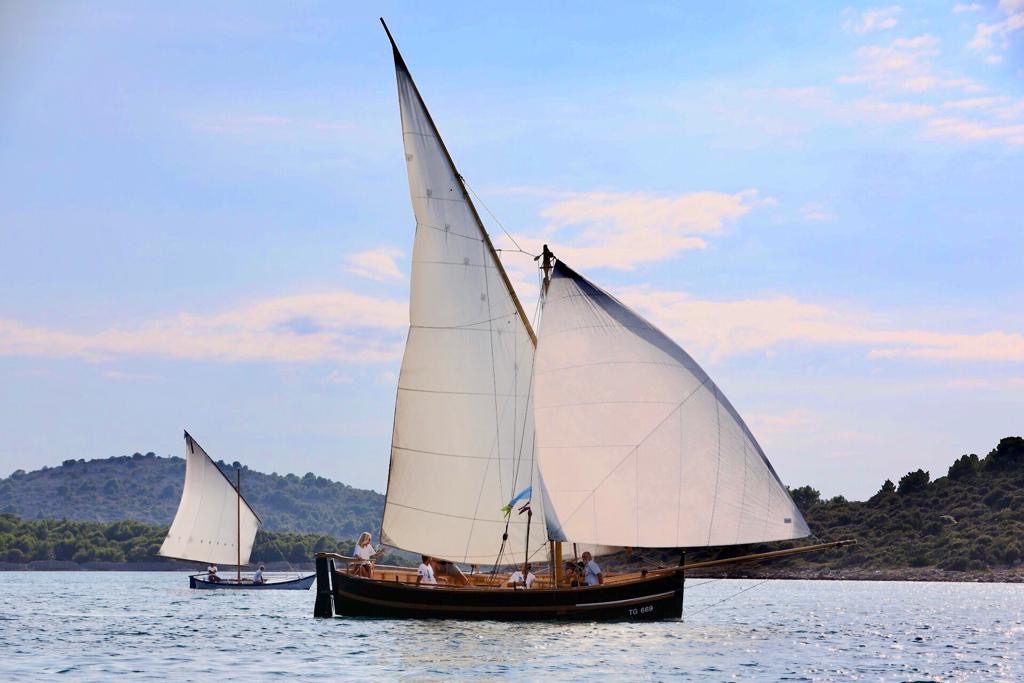 When we had met years earlier in that very spot, it was the beginning of my quest to get to know the culture surrounding these working boats on the islands and all the amazing people that live there. Within minutes, he whisked me off to meet one Čiro, a prolific master whose working yard anchors the community in its history of shipbuilding and boats, supporting a relatively large local economy of sailors, boat builders, and fishermen.

In Murter, there are as many as eight shipyards and additional small boatbuilding shops, as well as riggers, and blacksmiths. Aided by the economic benefits of regional synergies, these activities jointly support the large fleet of gajeta and leut that frequent the islands and today was their day.  A chance to run together more than 80 boats strong, and this time Vinka got to go with them. 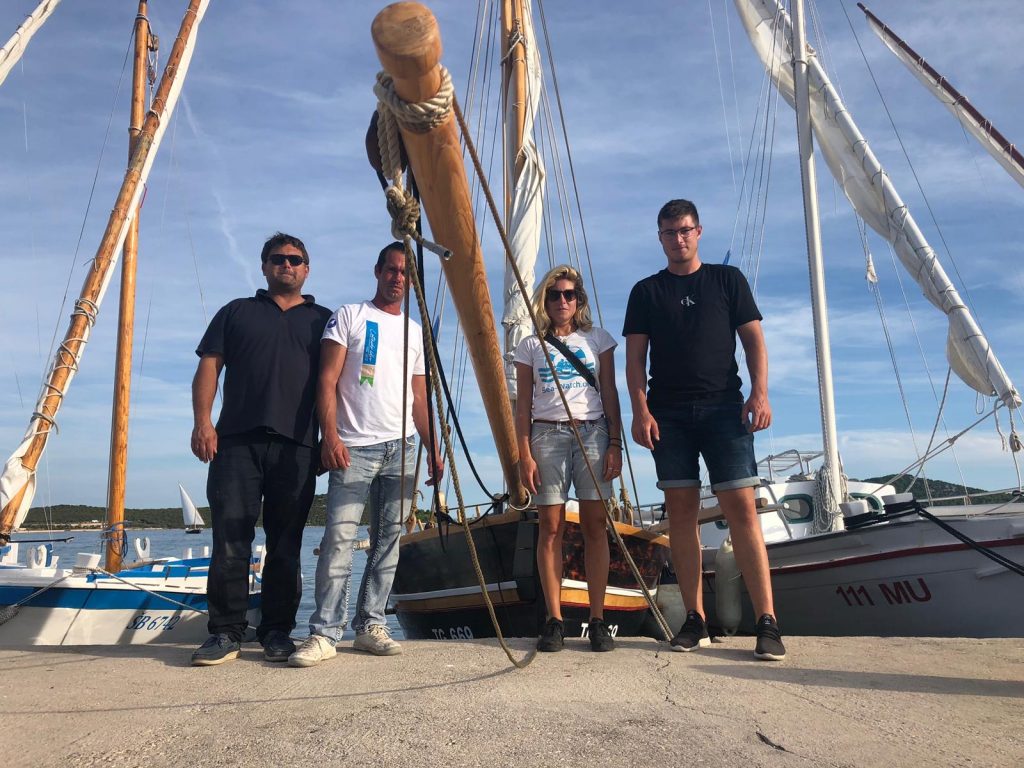 Vinka’s other crewmembers, Morana and Antonio are no strangers to AMI programs. Morana had sailed her boat to Murter and then joined last summers Kornati adventure. As well as being a sailor an activist and a youth advocate, she is an excellent helmswoman and steered Vinka for the whole race. Antonio was a student years before who came on one of the first Kornati Adventures and the following summer spent in Kaštela doing the bulk of the work on the first phase of restoration on Vinka as a student leader. That summer we also went to Komiža the birthplace of Vinka and sailed the falkuša Komiža ~ Lisboa around the Vis archipelago and into Stiniva beach, a famous box canyon. Antonio as a result of his experiences through AMI is now working as a captain on summertime yachts for the coastal cruisers as they tour the islands and still gets involved with traditional boats whenever his schedule allows. Our captain Andrija Mudronia may be new to our organization but as a lifelong sailor and resident of Murter, we are proud and honored that he has joined the crew. 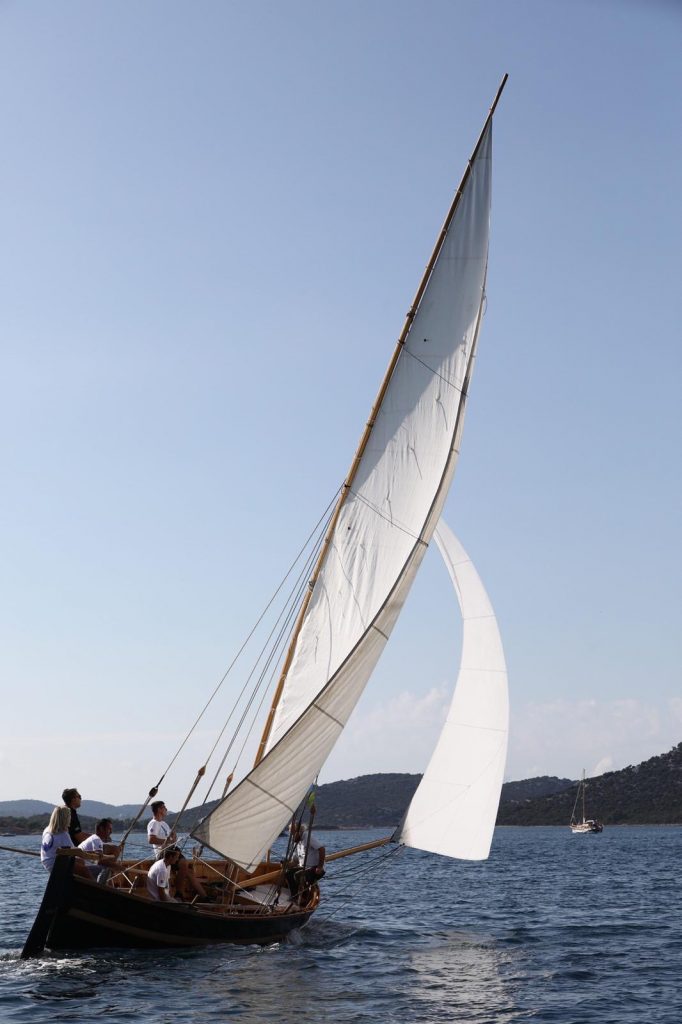 Vinka on the first downwind leg

When they fired the cannon for the start, Vinka was off like a rocket, downind she clearly has an advantage as one of the only boats in the fleet with a jib. Out of 83 boats in the fleet, she was 5th at the mark. While this crew is all, familiar with Vinka, on land and in restoration, for most, other than Andrija, this was their first or second time sailing the boat, much less sailing with each other. Building a good crew is probably one of the most important aspects of racing, and Vinka has an abundance of talent on the roster and with some practice she will have tons of potential. The upwind section was more challenging and as they learned the intricacies of the 82 year old vessel, left them comfortably back in the pack. Racing always dives the blood pressure up. 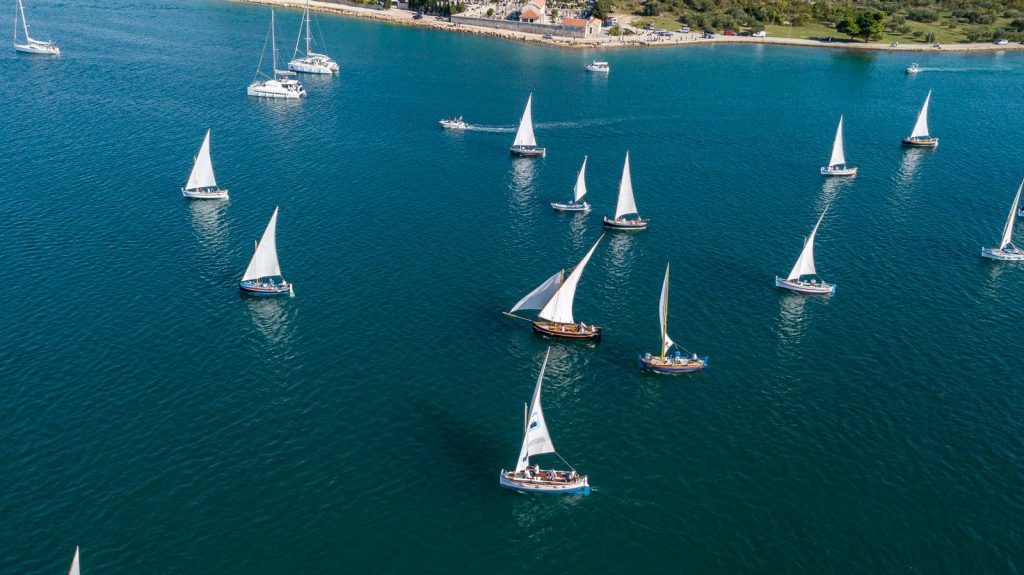 Some months after our first meeting, I had run into Mladen in the grocery store. I was very nervous at the time. We were provisioning for a weeks long sail and the strong NE wind the Bura was blowing. Mladen has this calming effect when you see him. He reminds you of Gandalf, not only because of his grey beard and long wispy grey hair, but because of his metered speech, and just like in Lord of the Rings, shows up when you need him most. 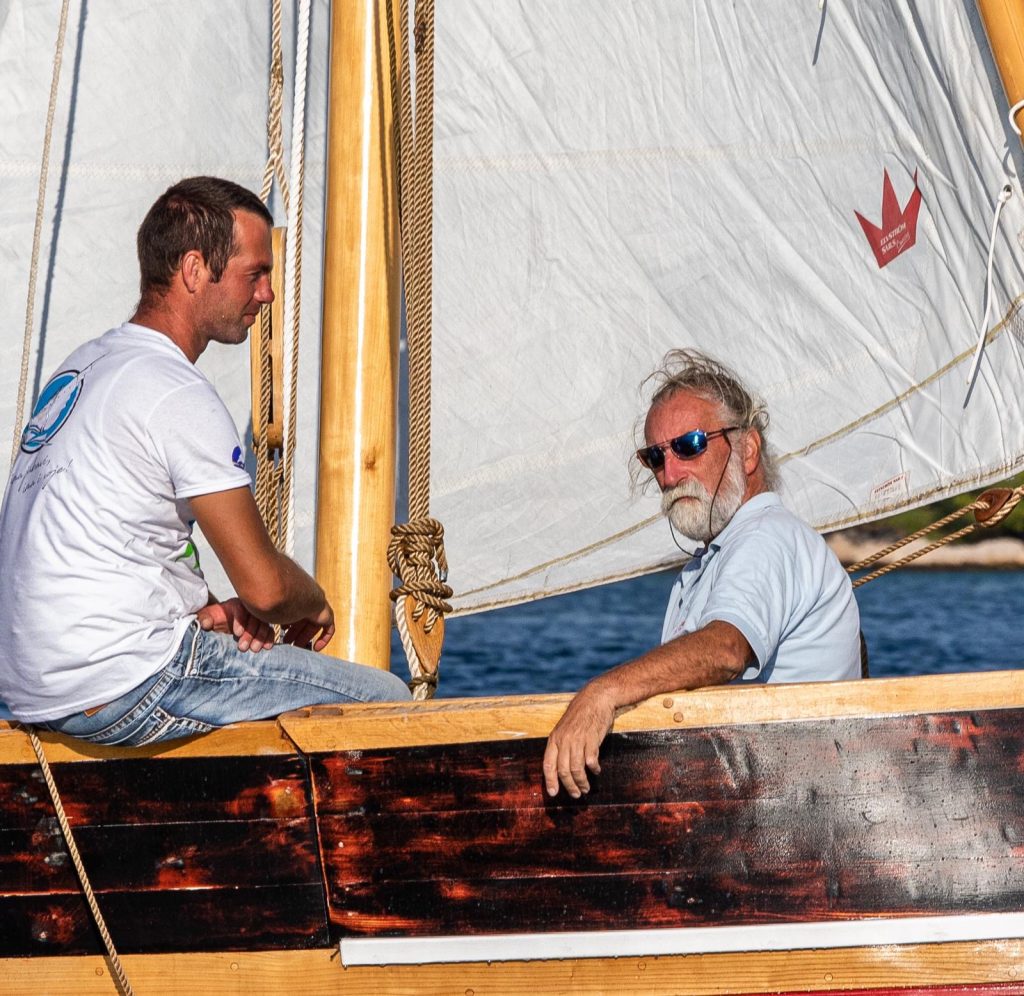 Mladen and Andrija in a moment of calm

“You should go,” he said

He walked me to the boat and helped me cast off lines. We were all glad to get out of the marina. I told him that later that summer I would sail to Palagruža. As the boat slipped from the pier her said, “I’ll see you there”

“Great! see you there,” I said with the impact of that statement still lingering. Palagruža is a rocky archipelago with no settlement and not much of a harbor. How would he ‘see us there’ on this remote rocky island 42 miles offshore.

As we arrived in Palagruža several months later, at the end of the Regatta Rota Palgruzaona, that summer of 2010, I was overwhelmed. We had just completed 5 days of sailing and three days of racing with the students of the youth home Maestral. There was big winds, mast issues, wins and losses all on a boat built in 1885, the leut, Slobodan Dalmacija. As I stepped on the beach for the first time in my life, Mladen was there, sitting alone. With no boat in sight, like a shipwrecked sailor, how he got there was a question, but this was Mladen. I instantly felt the weight lifted.

Races can be emotional times, camaraderie of events, sailors, and close calls and triumphs, and personal mistakes that make you cringe. Latinsko ‘idro is all of those things an event that inspires us all to be better sailors and stewards of culture. Years later, I had later learned the place where Mladen was sitting was site of a landslide that had covered sailors from the island Hvar around the year 1700. In 2013 Hvar wine maker Andro Tomić, opera singer Dinko Lupi and Capitan Jadran Gamulin made a dedication to those sailors through song, Koliko je vrimena da ni sunce sjalo, How Long was the Sun Shining.[1]

It was just one moment in eternity, besides these people when it was nice to be human.

One silent tear, two, preserves more beauty than life can ever give, just as one song can connect more people and centuries than one can take away from us.

The culture of memory, even when spontaneous and sincere, is a mirror of our own faces and souls.

When we clear our memories, there is nothing left!

Sitting on the beach that day with Mladen, I felt the thread that strings us all through eternity. We had found ‘place’ in the event and culture in the vessel. The community-building work done by the Latisko ‘idro organization has inspired several other regattas locally and regionally. Because the functionality and cultural context are intact, the vessel serves as the main conduit of transmission of intangible maritime heritage. Work needed to prepare the vessels and crews is passed down generationally. Learning the winds, the shapes of the sail, and the ways we revel in the moment and remember the past, just as Vinka has done with this amazing crew in her first race. I am honored that Mladen was onboard for her first race even if I could not be there and want to thank Captain Andrija and all who participated. 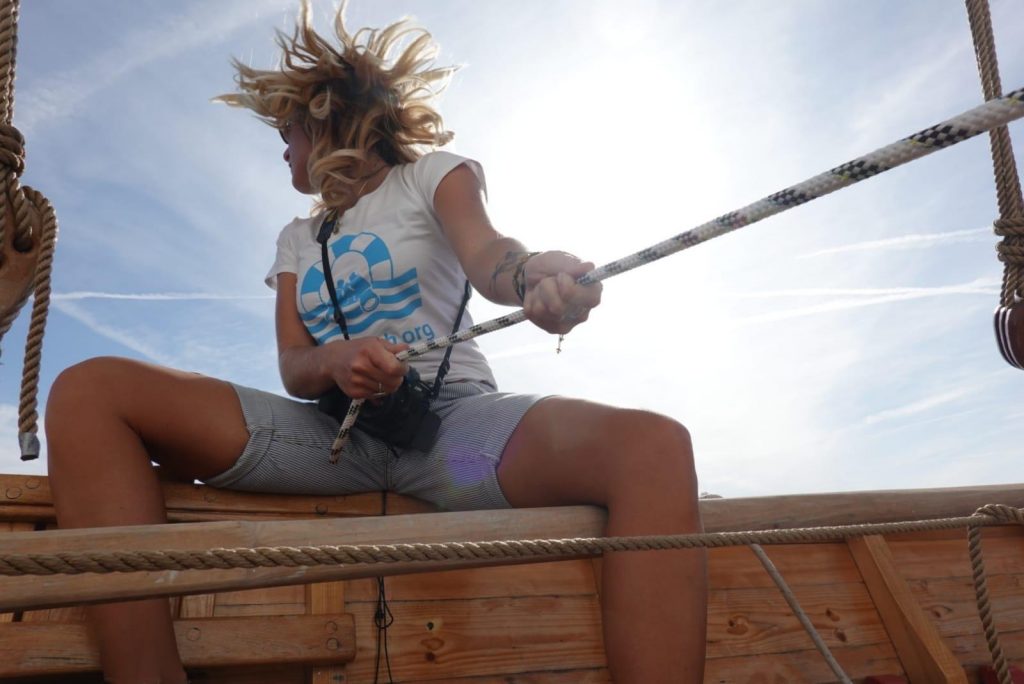 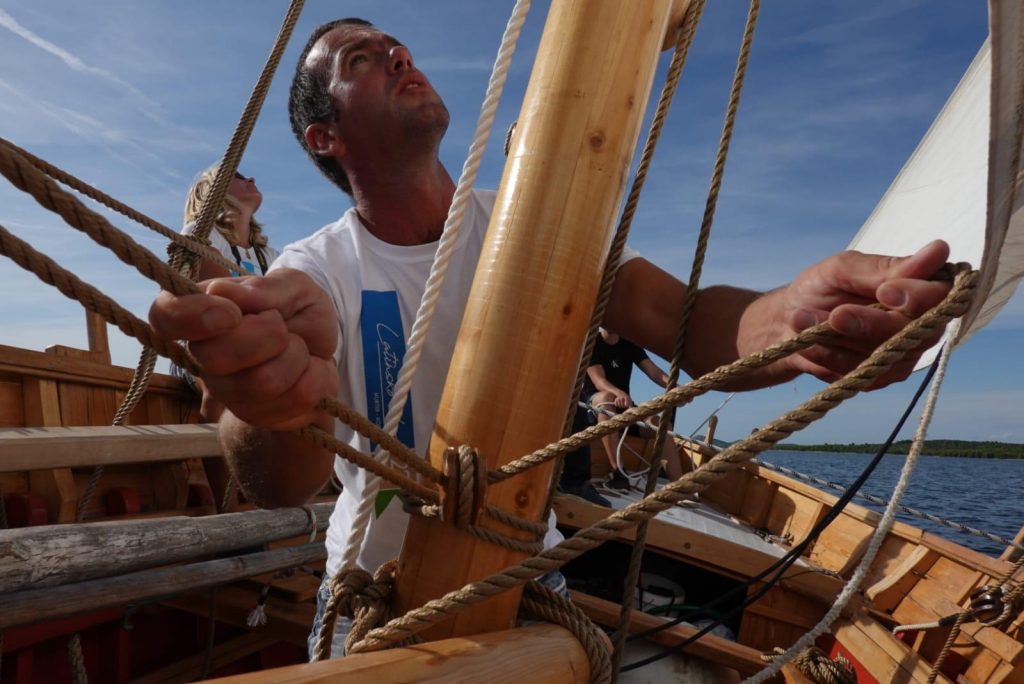 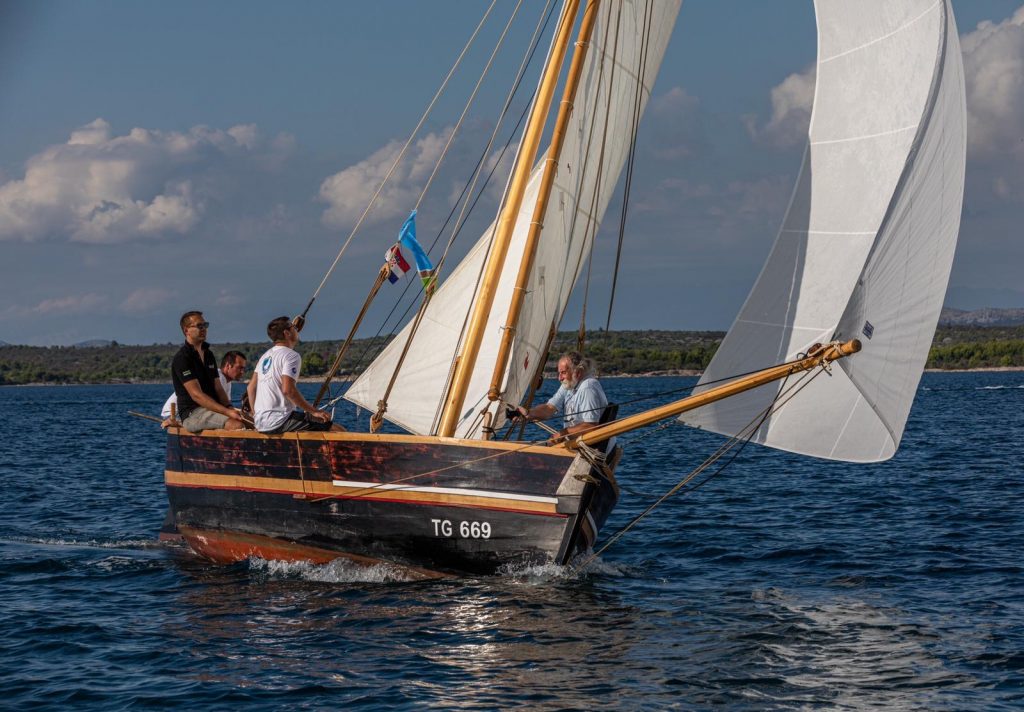