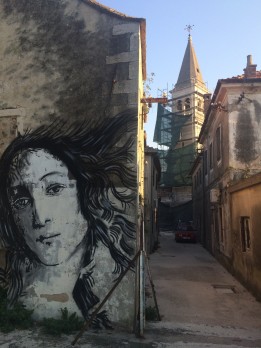 We decided we would have to get up very early to make it to Opuzen, on the river. Not because it was far away but because we had several stops to make. First we had to go to Zaostrog, a town below the Biokovo Mountains. This is interesting for us because one of our crew Vedran, the first mate on the boat, great grandmother was from this town. She lived up on the hill above the town and met her husband when he hiked over the mountain to come swimming at the beautiful beach in Zaostrog. The lowest point on the ridge must be at least 2500 feet. I can’t imaging how things have changed now with cell phones and email. His great grandfather lived in a village a full days walk from the sea. He climbed a mountain every time he wanted to talk to her.

After meeting Vedran’s relatives we headed off to Ploce. This is where we would get watermelon. There we met the Staff from the mayors office. They were excited to meet us since this was now the third year in a row we are doing this project. Izvor the Deputy Mayor is also a boat enthusiast, and rower of the famous Neretvanska lađa, Each Year they row 22.5 kilometers at a demanding pace. 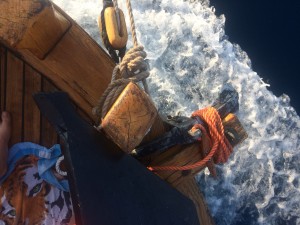 While I was in Ploče, I was also able to call our friend and boat builder Ante Gamuzina. Now retired, Ante built more than 400 boats in his lifetime. Our little trupa, is one of the types that he built. I cannot think of a better person to go sailing with us than Ante. When he came aboard, he brought the first melon of the trip. Having him take us up the river was really something special for us and him. We got to spend time together, he told stories to the students and we got to show him our skills as a crew.

The mouth of the river was full of people swimming and fishing. Little sand spits were like long beaches that spread out into the river. At a great distance from shore people still were only knee deep. Life on the river is something special. Little boats come and go and even Ante’s cousins came by to say hi. They had Antes’s dog in the boat and he went wild when he saw his owner on Bracera.

We dipped the Lanteena to come under the bridge and set the sail. With a nice maestral from the stern we sailed the boat up the river. We made way against the current and people came out of their houses to wave to us. We were probably the first Bracera to come up the river in who knows how many years.

We docked in the town of Opuzen for a little while. Long enough to get a cold drink and see the town and head back down to the mouth and Ploče where we would get the cargo the following day. As we returned back down the sun was setting and the crew was relaxed, content with their 50 mile day and smiles all around led our transit into the sunset. We docked just before dark, said goodbye to Ante and made dinner on the pier. At the end of the day the crew went snail hunting in the dark with flash lights but this is a story for another time. As I was falling asleep I was thinking how again in this industrial port, life can be full of such excitement and adventure, you just have to know where to look. Just like snail hunting you have to know where to look and believe you can find them. 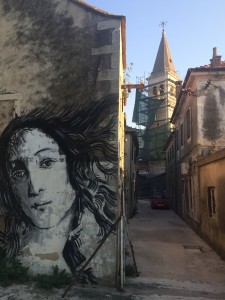