Building the Batelina: A New Program for a Traditional Boat

The plan had been brewing for a while. My friend Jim who started the Adriatic Maritime Institute in Croatia, wanted to invite me to come to their new boat building workshop in Split for a sort of residency. The project was to help start a shop and build small boats with youth. This would be the first step to continuing preservation of maritime traditions, promotion of environmental awareness and sustainability and youth development, in the region.

For me it began with setting up the new boat shop, Brodska Radionica Located in Kaštel Sućurac, a short drive from Split in the Dalmatian part of Croatia. The town is set in a semi-industrial setting on a beautiful bay framed with mountains in a working fishing village that seems to have been forgotten by many of the touristic exploits that have built up the other towns close to Split. Every day for a month and a half, me and my dog Lola walked from one side of the towns Riva or promenade where we lived, to the other, where we worked. Through the morning green market, passed the coffee shops along the promenade, the church, the school, town hall, the old folks home, the handball field to the little grassy area behind the locker rooms. The sun in our back, another great day ahead of us.

With help from the City of Kaštela and the ŽRK handball club we found a location and storage facility near the rec center in Sokolana. It is far enough away from houses to be able to make noise and right next to the public beach we were very visible. We had visitors on daily basis with people wondering what we were doing with all the wood at the rec center.

In Croatia,  over recent years, small traditional boats in the area have been entirely replaced by factory made plastic boats. A few remaining vessels have been covered with fiberglass, here called “plastification”. Our plan was to to recreate a traditional Dalmatian Batelina, a type of boat that used to be plentiful in this bay but was now almost non-existent.  We wanted to do this in the traditional way, with wood and nails.

Research had already started earlier in the year with online searches and the perusal of various books and magazines. We found many pictures of suitable small wooden boats, but most of them were from the North, Istria, or were river boats. We spent some time talking to people, drove around to meet folks, like the uncle of a friend of a friend who had a small boat, he called Batelina, possibly 100 yrs old but heavily plastificated. It was interesting to talk to people, hear their stories, and check out what was left of wooden boats in the various ports and basins. It helped me to get a feeling for the Batelina, her shape, scantlings, and other characteristics. 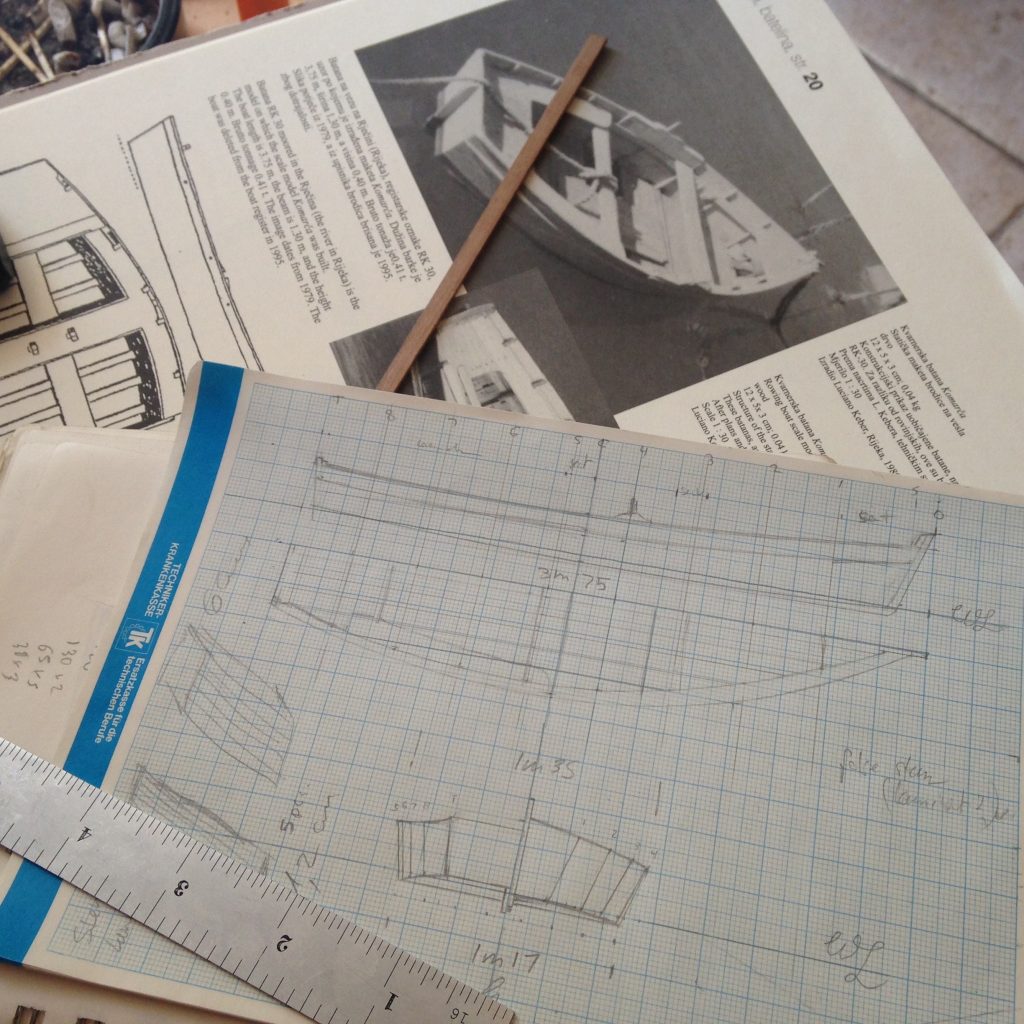 We found a photograph of a boat, two photographs of models, and a model kit, all of which were close to perfect, but not quite.  Initially, I had hoped to build a flat bottom boat, as I had seen on some photographs. It would be easy to beach, easier for the kids to build, require less time and material, and it would require less prep work for us adults. There were many reasons why this would have been the way to go, but in the end there were too many comments from people we trust and respect who insisted that a v­-bottom is a must for the sea and the proper design from this region. What we wanted was for people to recognize this boat as something of theirs not as something built by the outsiders. We didn’t want to build some boat with local kids that had no local significance. One major criterion was that the boat should fit all 6 kids from a group at once, no easy task by any means.  While we set up the shop and bought tools and materials during the day, I spent the evenings and nights combining comments, photos, and plans to draw the Dalmatian Batelina replica we ended up building. 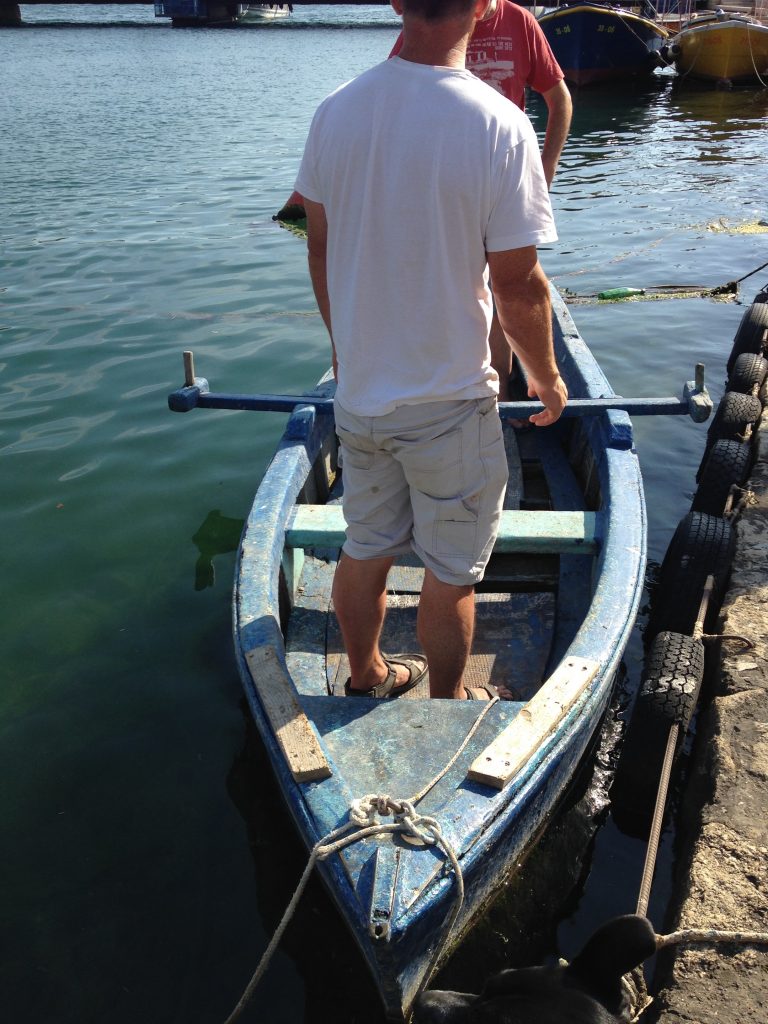 We had two groups of youth take part in the project. 3 days a week, a group of boys and girls ages 10 through 16, who live in the Maestral orphanage in Kaštel Lukšić, and twice a week a group of mostly girls around age 14, from MOST program in Split. The youth got to work on, help with, or witness the completion of most aspects of the building process from setting up the strong back with molds to the final touch of paint.

We started by setting up a strong back, on which the boat would be built. Since it was outside on a grassy yet very rocky area, we elevated it onto benches from the locker rooms of the handball team which we fastened into the ground with huge nails, we never actually asked anyone from the handball team, but I wonder what they would have thought about us building our boat on their benches.   From the drawing, we took the shape of the boat and made molds from simple pine. Then we glued up the oak planks for the transom and cut it to shape. Lastly we milled the oak for the stem, added the bevel and continued by setting up all the parts onto the strong back.

Once stem, transom and molds were in place, we clamped on the ribbons to define the shear- the upper curve of the planks, the chine- where the planks meet the bottom,  and rocker or curve of the keel. First the battens got clamped on to the measurements from the plans, then they got adjusted by eye to make for a truly fair shape.This was a fun process for the kids since they had to imagine how their boat was going to look.

With just two strakes, planking was easy. We spiled, or marked off distance, to the ribbands, cut out the plank from nice clear spruce, copied the shape to the same plank for the other side and planed them together and rough cut the forward angle for the stem. Once attached to the stem the two planks formed a huge “V”. It took several students to gently bend in the planks, clamping them to the molds as they touched them, and finally attaching rope to the overhanging ends, using this “spanish windlass” to finish tightening them to the transom. We repeated the process for the sheer plank. Then we fitted the frames, adding the bevels for each station to pre milled frame stock, and measured the floors. The floors were sawn, with their depth set to the rocker and their top edges on the same plane to easily hold the floor boards. Then each station except for where our molds were set up got assembled and nailed into the boat. 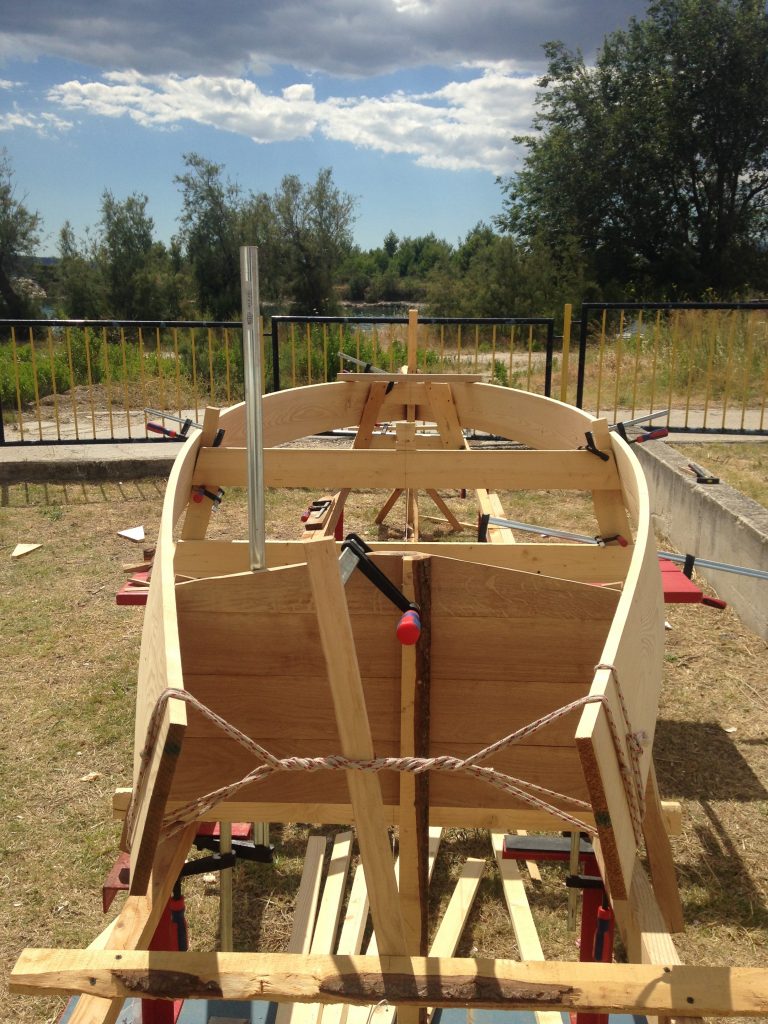 The keel is a heavy straight timber that was bent over the centerline. It was fitted with just a slight bevel for the garboard plank.Then floors and chine had to get the correct bevel for the bottom which will got nailed straight into the plank and floors.

Fore and aft fir planks  caulked with cotton and bedded in bitumen at the planks and transom, closed up the bottom. Then we could flip the boat, remove the molds and add frames and floors there, add rub rails, stringers, seats, and attach the false stem. The rowing station just aft of the seat is a box that holds the thole pin, which is where the oars are attached, between the frame and a block.  The whole building process took 3 weeks, and we were all amazed at how quick the boat came together. 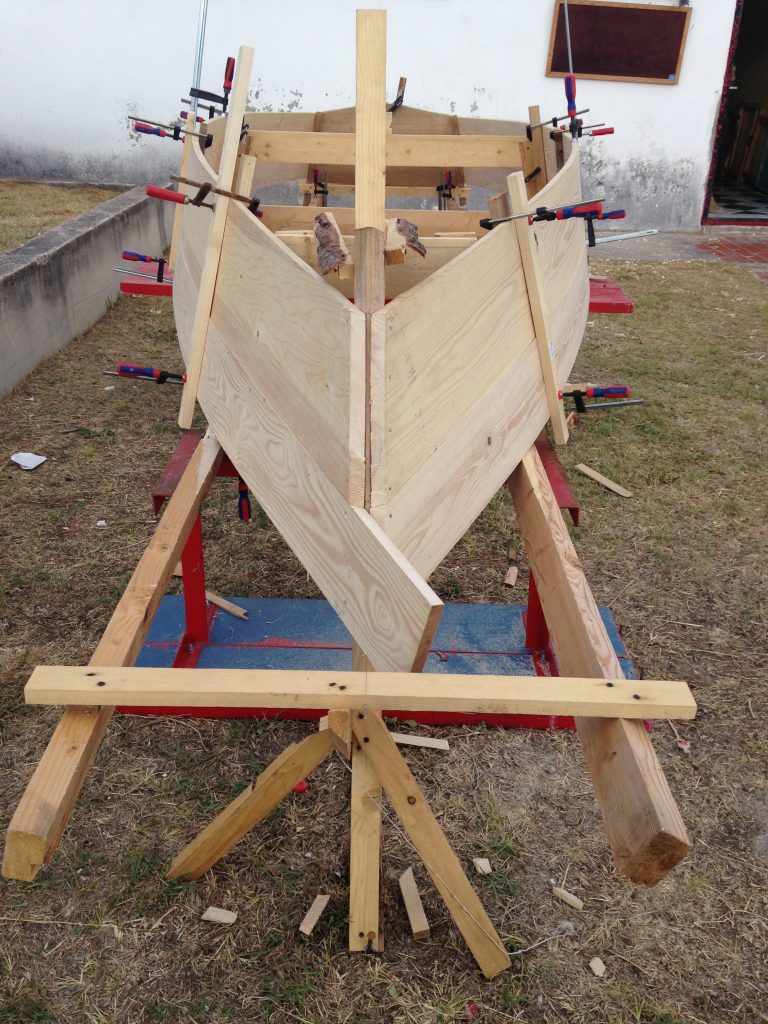 One big challenge for me was not speaking any Croatian in the beginning.  I think we all managed to communicate well and worked together around the boat and the tasks at hand. A universal understanding of boats helped with the adults, and a lot of sign language, charades, and drawings, helped with the students. Luckily there were several English speakers who could help me translate. One language anecdote is the fact that every time someone didn’t understand the English word, I pointed to the item and asked for the Croatian word. Very often it turned out to be a German word like “Kabel” for “extension cord” my favorite Germo­Croatian word was“pause” which was pronounced POW-za for “break time”. 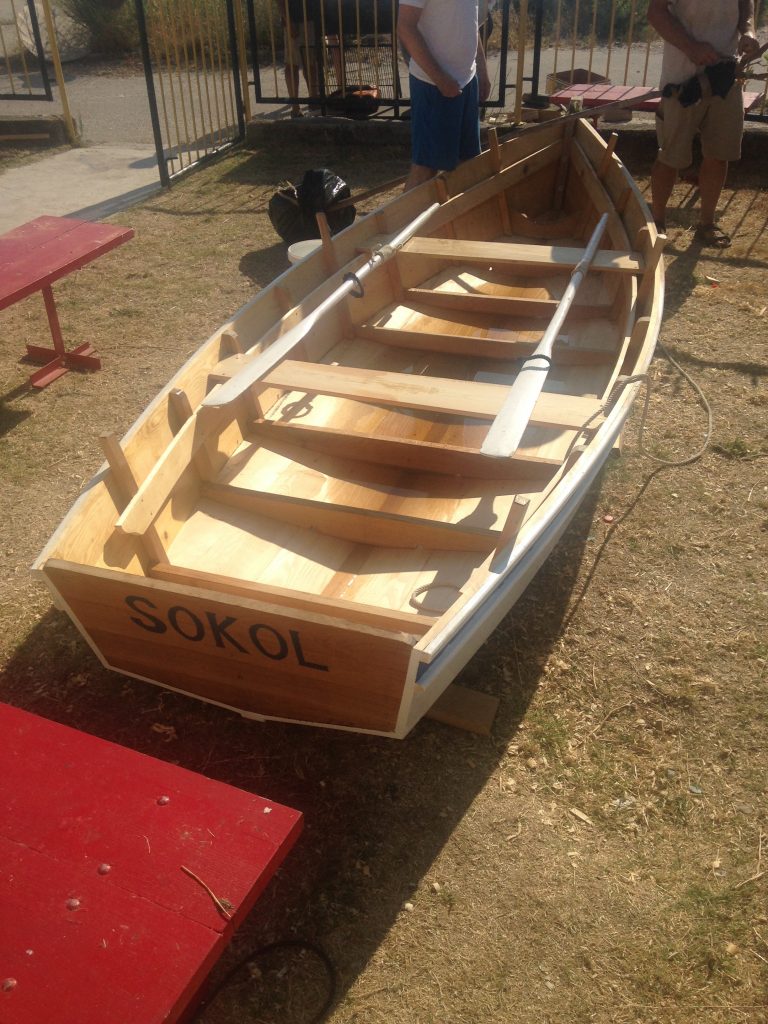 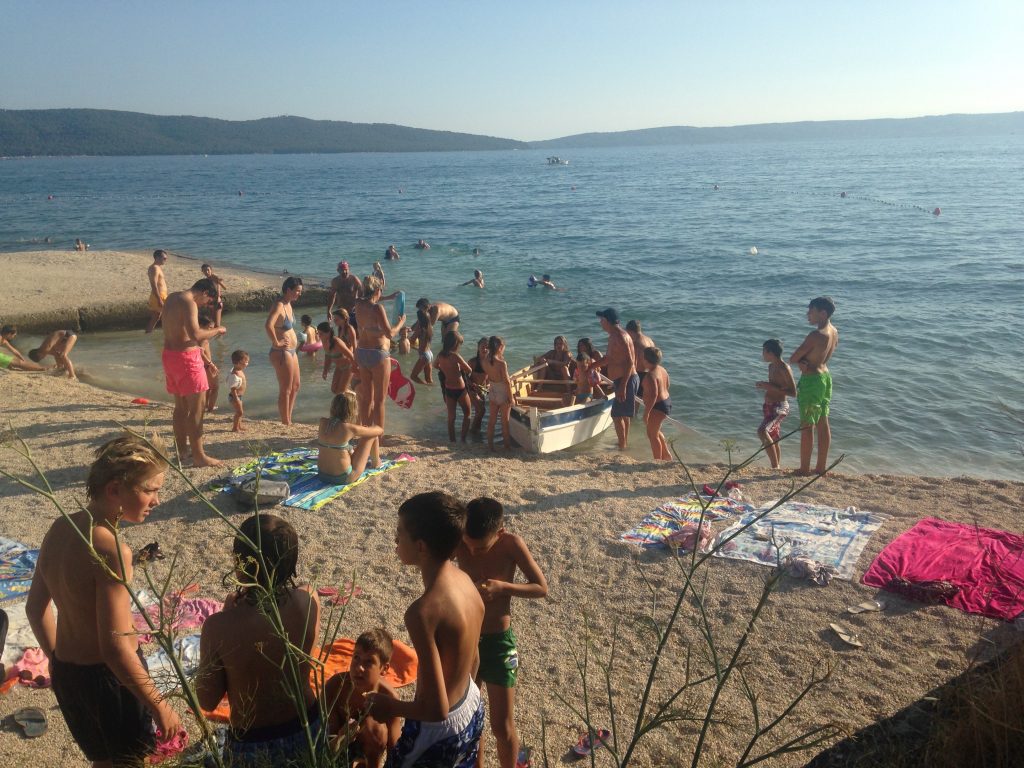 As the boat started to take shape, people from the public would stop at the fence and start chatting, sometimes I was lucky and could partake in the conversation in English or German, other times I had to rely on second hand translation after the conversation was over. ost of the time, actions speak more than words, and as I started getting a little idea how Croatian works, I started understand words like “good”, “she works” and I think I passed my test. This was later confirmed when people started offering me beer, wine, strudel, fresh figs and other pleasant offerings. By then I knew how to say, “thank you”.

One Interesting story about language came up in the naming of our new batelina. We asked the students to name the boat and we had many different suggestions but the one that stuck was Sokol or Hawk. I had been working there for now one month and never realized that Sokolana, the name of the place where our workshop was located was something like “Hawks Rest”. We all loved the name, and when the folks from town came out for the christening they loved it too. 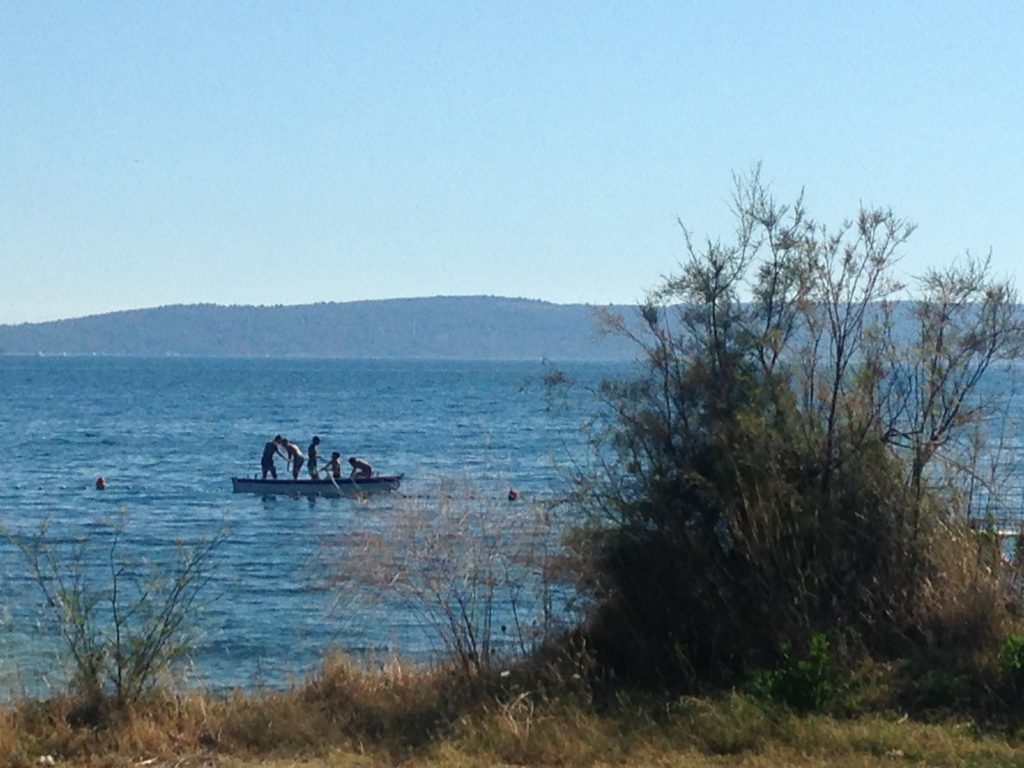 My greatest pleasure was planking the entire bottom together with one teenage girl in a day. In all my years in the boat yards I have not had such a quick and accomplished learner turn helper turn colleague in such a short time. This is closely followed by seeing the kids understand that their work turns into something tangible and then useable. I feel proud to have participated in the building of a traditional wooden Batelina by youth and am looking forward to more work at the Brodska Radionica in Sućurac. 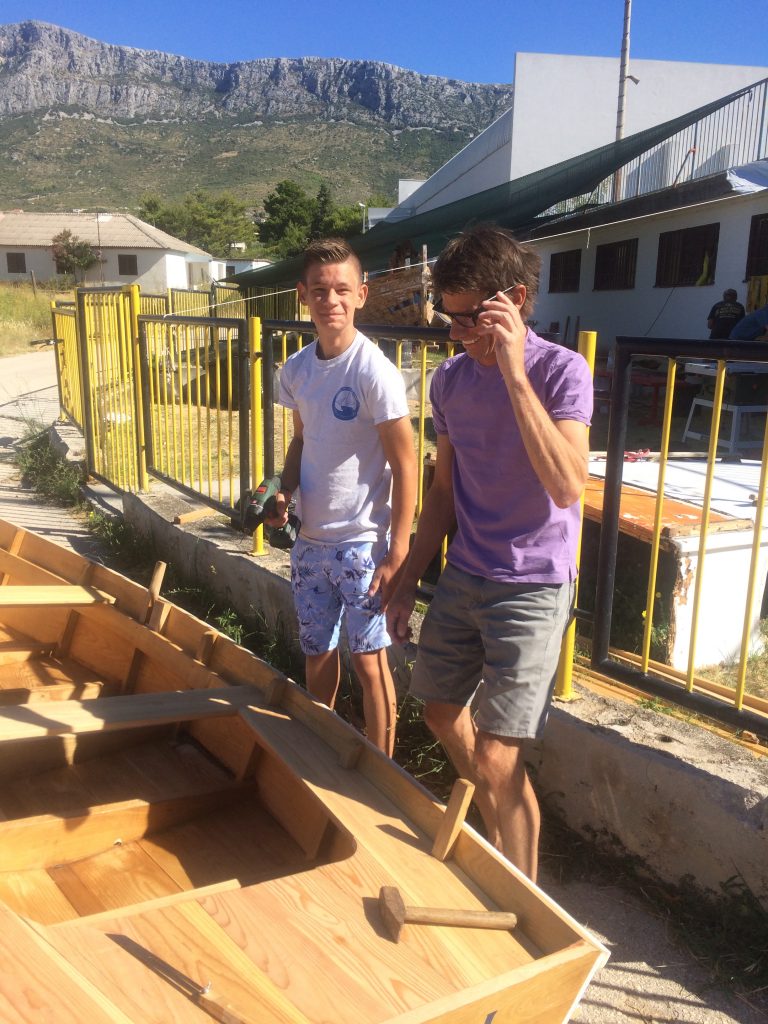 Mio and Mislav putting on the finishing touches!