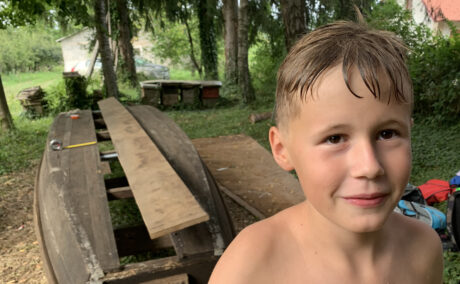 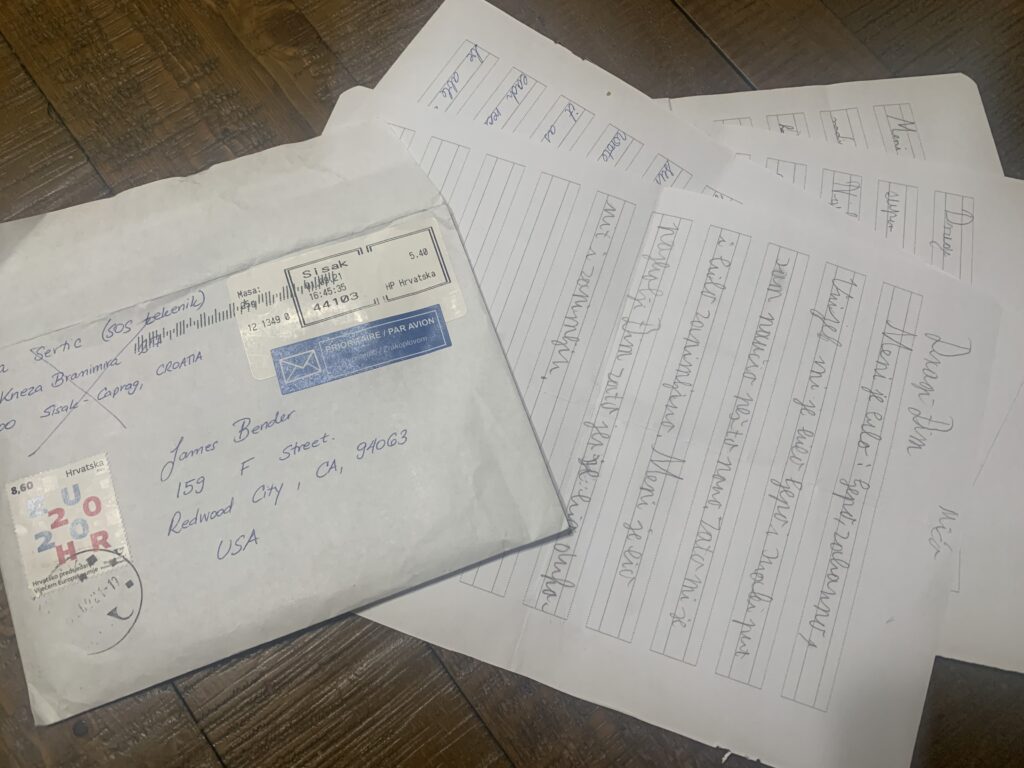 When I went to the postbox, there was a letter from Lekenik, Croatia. A place very close to my heart. This is the site of the SOS children’s Village near Sisak Croatia, A home that we have been working with for the past 6 years. This past summer, we had finished a three month youth program, a boat building, peace building, rowing, zooming, a virtual and in-person program, located on the Kupa River in a village called Stari Brod which means “Old Boat” in Croatian. Such a fitting address for us and our work. I was home and when I opened the letter it was full of notes from the students that had spent time with us each Monday for 12 weeks over the summer.

At the time, I was trying to see how it might have seemed through our students’ eyes. The pandemic had been going on for about 17 months, there had been a severe earthquake over the winter, but now June had arrived, summer was right around the corner and we were about to start our first program in almost 2 years. Many of the students who were coming had heard about our programs before. The programs had begun more than 12 years, earlier so they knew about us and what their friends and house mates had done with the Adriatic Maritime Institute. As they stepped out of the van that first day, they seemed eager and nervous.

For summer 2020, the crew from Adriatic Maritime Institute had the most ambitious plan yet. We planned to do a cross border international program with students from Croatia, Bosnia and Herzegovina(BiH) as well as Germany. Students were supposed to come from all over Europe to take part in this multifaceted peace building expedition designed in order to work with students along the rivers of the central region which borders countries of Croatia,  Bosnia and Herzegovina. It was planned to help sustain the intangible heritage of boat building, maritime skills, and promote environmental stewardship.  Along the rivers, the boat is a cultural object and traditions are shared by each of the countries and cultures that live along their banks. In this project the boat is used as a practical element in post conflict reconciliation, team building, and a tool around which the curriculum can be arranged.

This would have been the fourth time the AMI crew had run this dynamic program on an island situated in the middle of the Una river which forms the border between Bosnia and Herzegovina  and Croatia, but then Covid 19 changed our world. After a 12 month delay we decided to run a hybrid in-person exchange where students from the various countries could meet and talk about the Rivers in their own locality.

Inka Petersen, a boat builder from Germany, a good friend and colleague, who has spent time with AMI in the past was in Germany heading up the programs there for Ahs-O,  the Working Group for Traditional Boatbuilding in East Friesland. We had jointly put the program together before the pandemic was a reality.

From different cultures, religions, language, regions they would all share their experiences on the water in boats. Now there was another added level of similarity that all the students shared.  Our program connects kids who live in homes for children with boatbuilders and on water programs around the world, they would be able to see and hear stories first hand from other regions from kids that are just like them in more ways than they could have imagined.

This is what Inka said about the program in the documentary she put together with the crew from Germany.

“The idea for this encounter, with these youth, from these countries,  is the joint similarities. Not only the participants’ similar living circumstances, but also the parallels of what happened in the history of their countries. All of them are too young to have lived through it, yet, all of them are exposed to the results. The program examines borderlands that have had historical significance during conflicts and hold current importance as critical ecological habitat. It explores how boats have been used to connect cultures and to flee war, violence, or political persecution.” ( From the Boats Building Bridges Documentary)

Our programs start with introductions, we make a circle and play some name games. I bet they thought it was silly but they were laughing so it was not too bad. As I explained that the goal was to restore two boats that their house mates had built more 5 years ago, their eyes widened.

Stjepan Butina was a boat builder from Nova Drencina near Sisak Croatia, a master at his craft and also a fisherman, hunter, farmer, and all around jovial soul that loved to tell jokes and be serious with the kids as he worked. After building the boats with Stjepan, I told the Kids they could name it whatever they wanted, but they chose the name Stjepan and the second group chose Butina. Now sitting before us were two boats that needed a lot of work: planks, paint, calking. I imagine they saw the task as pretty daunting, I know I did. Stjepan Butina had passed that winter and we would restore them in his honor and the kids all agreed. 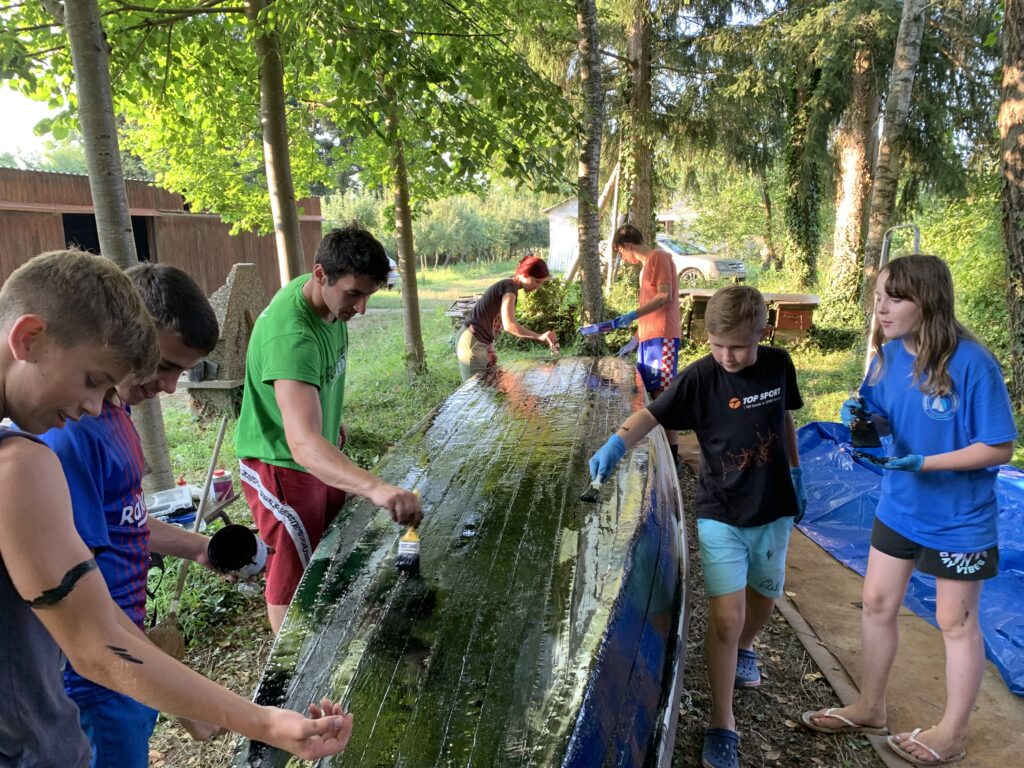 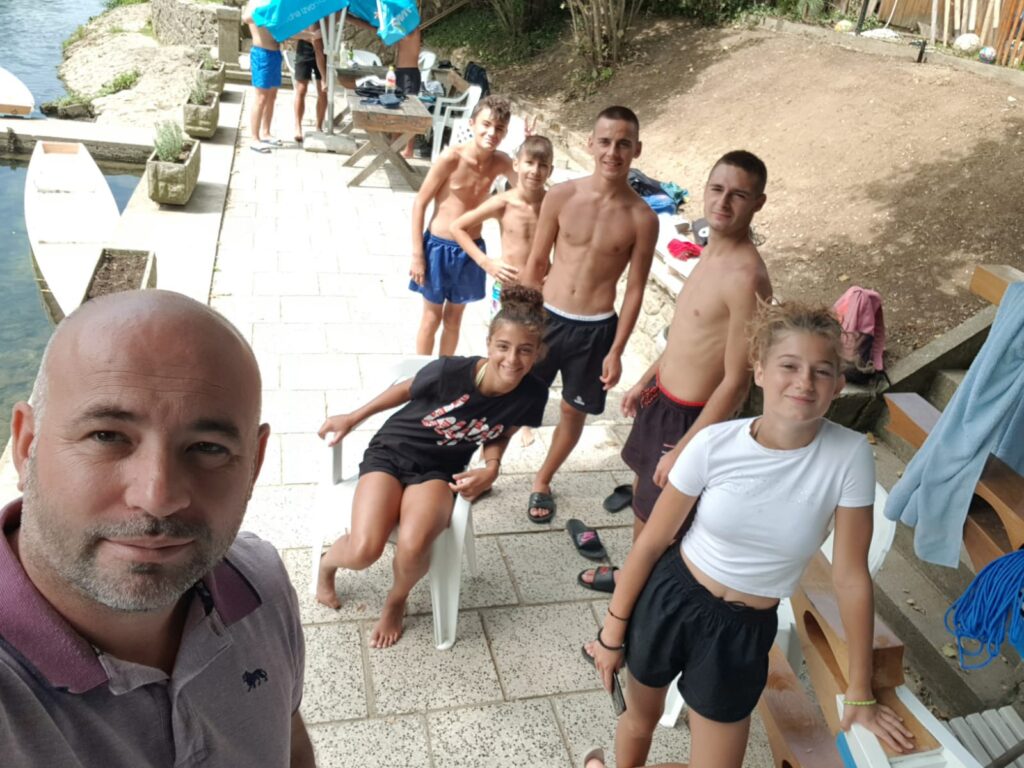 After introductions, I explained that we have combined with other groups online and we would get a chance to meet them and do similar activities together. When it came time for the Zoom, it must have seemed a bit awkward, as we huddled around devices to get a peak at the students from around the world.  Simultaneously, there were kids in BiH, in two towns Banja Luka and Bihać, and in Germany doing similar activities. 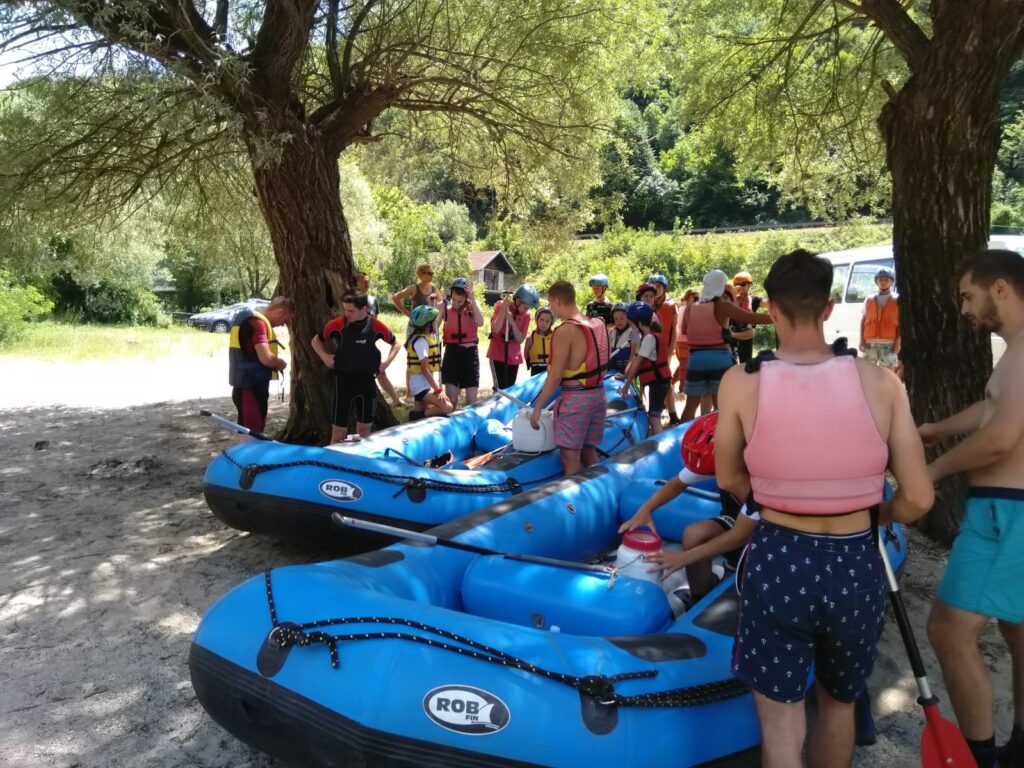 We did a virtual knot tying class and they practiced tying up their leader with the knots they had learned. Hey, I guess it wasn’t that bad. The focus shifted from local to international, zoomed in the blink of an eye, meeting new people, seeing new places, what an exciting new element that had been introduced.

Each location, Stari Brod, Croatia on the Kupa River, Banja Luka on the Vrbas River, Bihać on the Una river and the Kanals of Emden, Germany were able to have a separate program, each sharing the curricular elements of Boats Building Bridges; peace building, environmental and social education, and job skills training.

Poling the traditional boat the Dajak on the Vrbas River

The final phase of the program is the expedition. During the expedition the students were responsible for all aspects of voyage preparation and navigation. The trip also represents a combined effort from all of the countries working together with a common goal. I am sure the students will always remember slipping down the Kupa River with a good swift current, zoom from Germany and BiH on our phones, broadcasting and sharing, learning and having fun, seeing others in far away places who are similar to ourselves doing similar activities, boats do build bridges. 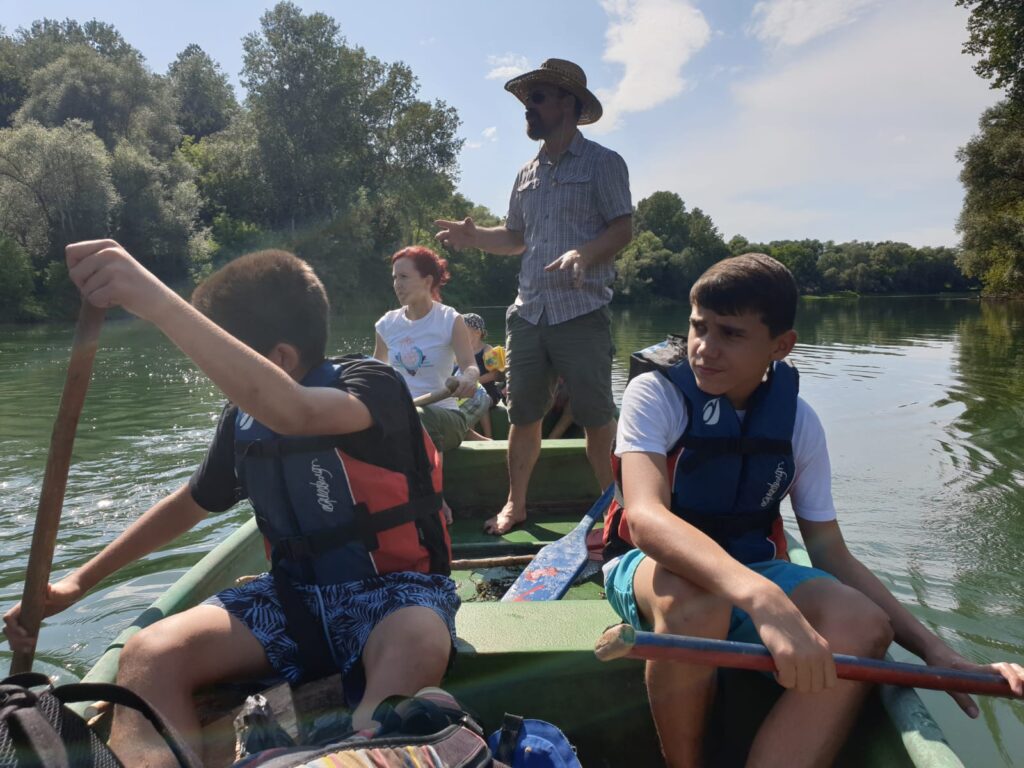 In an era of the digital nomad, to receive a handwritten letter from a student, months after, made me realize that the work that we did had a profound impact. As I opened the letters they reminded me of what a great opportunity we discovered by having groups from all over get together.